To share your memory on the wall of Alethea Dawkins, sign in using one of the following options:

Provide comfort for the family of Alethea Dawkins with a meaningful gesture of sympathy.

Receive notifications about information and event scheduling for Alethea

We encourage you to share your most beloved memories of Alethea here, so that the family and other loved ones can always see it. You can upload cherished photographs, or share your favorite stories, and can even comment on those shared by others.

Posted May 09, 2020 at 09:58am
My sister, you will be missed. Remembering when you, Leif, Eboni and myself will have theses conversations during working hours, planning the entertainment at family dinners, we came up with the “Family Idol” and you were the main judge.
We will do that again, when we are together as a family in PARADISE.
LOVE EVETTE
Comment Share
Share via:
DB

Posted Apr 30, 2020 at 07:11am
To loss someone we love in death is extremely heartbreaking. To know that Alethea is no longer suffering and in Jehovah's memory is one of the greatest gifts given to us. May the love you shared and the pleasant memories of her bring you comfort and peace. Oceans of Christian love to all, Dan & Doris 💕
Comment Share
Share via:
FA

Posted Apr 24, 2020 at 09:05pm
I love this pic of Alethea. This is how she remains in my memory. As teenagers we hung out and went on a weekend trip to Hershey, PA and stayed in a fancy hotel. I remember our Atlantic City trips too. I look forward to seeing my friend again and living forever with her in paradise.
Faye A.
Comment Share
Share via: 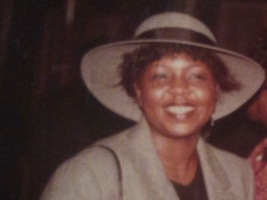