To share your memory on the wall of Bernadette Green, sign in using one of the following options:

Bernadette was raised in the Bronx, NY by her Aunt and Uncle, Elizabeth and Curtis Johnson, whom she referred to as her Mom and Dad. She attended Bronx Public Schools.

Bernadette was employed for many years as a Store Manager at Wendy’s until she became no longer able to work.

Bernadette was a devoted wife, loving mother, caring sister, beloved friend, and a nurturing grandmother, who adored her three grandchildren.

Bernadette had a high-energy fun-loving personality; she was strong but gentle, kind yet fierce. She was loved by everyone who knew her in City Park (New Rochelle) where she lived for many of her early adult years. Bernadette enjoyed being with family and listening to music, while sitting around telling old family stories. She had a love for penny slots and would often visit Empire City Casino in Yonkers.

Bernadette resided in Yonkers, NY with her partner Louis Harrington until her health began to fail and she then went to live at Martine Nursing Home in White Plains, NY where she spent her final days.

Receive notifications about information and event scheduling for Bernadette

We encourage you to share your most beloved memories of Bernadette here, so that the family and other loved ones can always see it. You can upload cherished photographs, or share your favorite stories, and can even comment on those shared by others.

What do I do without you,
Where do I go from here,
Believe me sis I have no idea
Sis I love you,
I never thought I'd have to say
My sweet sister Bernie
May in peace you lay.

Posted Apr 27, 2020 at 08:38pm
My cousin was Great she would brighten The room when she walk in with her big smile. I remember we all went to Florida we had a ball family trip we drove from NY all the way there ,she rode with me and her selection of music was on point we was jamming to “lock up wont let me out “ by Akon and styles p and she sung along with us and enjoyed herself the whole trip she even said she need to do it again she was loving to all of her family and wasn’t shy at all She was Great !! And i will miss her dearly! !🙏🏿😇🙏🏿 My sincere condolences again to my cousins Don ,Jah and Ken and Pat ,Diane and Brenda with love ❤️
Comment Share
Share via:
C

Posted Apr 27, 2020 at 05:42pm
Happy are those who mourn, since they will be comforted. Thinking of the family at this sad time & sending love to all, especially her boys.
-Cheryl💞Britney
Comment Share
Share via: 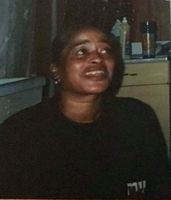