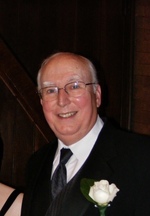 Daniel is survived by his two children, Denise Robles (Gabe) and Christine Gaven both of White Plains; as well as his two grandchildren, Olivia Robles and Benjamin Robles. Daniel is also predeceased by his brother Terrence in 1999.

Daniel was a long-term member of the Friendly Gathering Committee, Knights of Columbus and Friendly Sons of St. Patrick; as well as a lector at St. Bernards Church. He was a lawyer at Palmeri & Gaven for fourty-eight years. He also served time in the United States Army. Daniel enjoyed running cross-country, both the indoor and outdoor tracks at his high school, Seton Hall Prep, and later during his time at Providence College. He was an avid Yankee fan and train enthusiast.

In lieu of flowers, donations can be made to Special Olympics; 133 19th St. NW, 12th Floor Washington DC, 20036. www.donorservices@specialolympics.org