To share your memory on the wall of Edward Ciocca, sign in using one of the following options:

Provide comfort for the family of Edward Ciocca with a meaningful gesture of sympathy.

Print
Edward John Ciocca, Deputy Chief of the City of White Plains Fire Department, died May 1, 2020. He was 62. Edward was born April 28, 1958 in White Plains to JoAnn MacDonald Ryan and the late Adelmo Ciocca.

Chief Ciocca was a 35 year vete... Read More
Edward John Ciocca, Deputy Chief of the City of White Plains Fire Department, died May 1, 2020. He was 62. Edward was born April 28, 1958 in White Plains to JoAnn MacDonald Ryan and the late Adelmo Ciocca.

Hired May 20, 1985, Ed was assigned to firefighter Group 4 until his promotion to Lieutenant, September 3, 1991. He led Fire Prevention for several years and on July 6,1999, was promoted to Deputy Chief.

Edward was kind to everyone he met. He was a source of strength and inspiration for all who knew him, and his presence lit up every room he entered. He was a principled leader and dedicated public servant. Edward was a beloved father and son who treasured family and emphasized it's importance. Ed was a sports enthusiast, and an ardent fan of the Oakland Raiders and the Chicago Blackhawks. He enjoyed attending games with his family.

In lieu of flowers donations to the American Nurses Foundation
www.nursingworld.org
Read Less

Receive notifications about information and event scheduling for Edward

We encourage you to share your most beloved memories of Edward here, so that the family and other loved ones can always see it. You can upload cherished photographs, or share your favorite stories, and can even comment on those shared by others.

Posted May 05, 2020 at 07:42am
Eddie, you were one special person and will be remembered always. We will miss you terribly our hearts our broken. Rest in Peace our dear friend. We love you. Always on our minds, forever in our hearts.
Love Donna & Tony xo 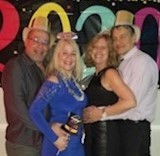 Posted May 04, 2020 at 11:51am
May the tree planted in Eddie's memory bring hope and renewed positive energy to all who loved and will miss him. XOXO Maria, Bob, Katelyn Weyrauch