To share your memory on the wall of Gunther Pohle, sign in using one of the following options:

We encourage you to share your most beloved memories of Gunther here, so that the family and other loved ones can always see it. You can upload cherished photographs, or share your favorite stories, and can even comment on those shared by others.

Posted Feb 21, 2020 at 03:03pm
Diane, please accept my condolences on your father's passing. Thinking of you and your family.

David. We are just today sitting and reading your kind words. My father will love the tree. He loves nature and belonged to the arbor society. Thanks!
HS

Flowers were purchased for the family of Gunther Pohle.

Posted Feb 21, 2020 at 07:11am
Our thoughts and prayers are with you in this difficult time. Our warmest condolences.

Thank you very much for your kindness. My father loved nature and was always trying to plant more trees. He belonged to the arbor society. He will enjoy the tree. Best regards. Diane and family. 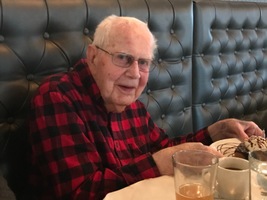