To share your memory on the wall of Isador Feldshon, sign in using one of the following options:

Provide comfort for the family of Isador Feldshon with a meaningful gesture of sympathy.

Isador proudly served in the United States Army, during WWII, and was a member of the Jewish War Veterans. He was the owner of Brother’s Shop a men’s clothing store on Main St. in White Plains, and then went to work at Neiman Marcus in White Plains. Isador was part of the Housing Authority in White Plains. His love of the city led to his candidacy for the White Plains City Council.

Isador is survived by the love of his life, his wife Sonia, his daughters Ceil Hickey of Hartsdale, Lynne Bernstein and her husband Barry of White Plains, and his brother Lester. He was the proud grandfather to five grandchildren; Steven Bernstein, Staci Ciampanelli, Michael Bernstein, Ryan Hickey, and Alison Hickey, and proud great grandfather to four great grandchildren; Ashley, Connor, Brianna, and Emma. He was predeceased by three brothers; Morris, Jack, and Abraham and his son-in-law Stephen Hickey. His family was his pride and joy.

Receive notifications about information and event scheduling for Isador

We encourage you to share your most beloved memories of Isador here, so that the family and other loved ones can always see it. You can upload cherished photographs, or share your favorite stories, and can even comment on those shared by others.

Posted Jul 08, 2019 at 01:42pm
Helen and I are saddened to learn that our neighbor and dear friend Itsey has passed away. He, Sonia, and their family are all very special people in our lives.
We met Sonia and Itsey in 1983 when we moved to White Plains, across the street from their home. They immediately walked over, welcomed us to the neighborhood and presented us with a plate of goodies prepared by Sonia. Sometime later, at Easter, we invited Sonia and Itsey over after dinner and, as part of our festivities, offered Itsey a plate of Easter ham and sauerkraut. Itsey took one look at the plate, stared at both of us, and said “I don’t eat that crap.”
We both knew instantly that we had friends for life.
..Helen and Alan Runck; Stuart Florida
Comment Share
Share via:
AR

Posted Jul 07, 2019 at 03:59pm
We are thinking of you Sonia and remembering our dear friend and neighbor Itsy. Always in our hearts. 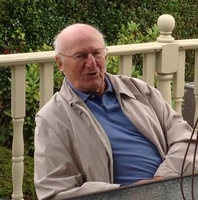