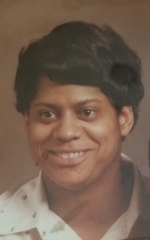 Mary Ellen Sanders was born in White Plains, New York on November 28, 1951 to Sidney R Jones and Mary May Jones, and was one of seven children. Mary entered upon the sleep that knows no awakening at the age of 68 at Montefiore Hospital in the Bronx.

Mary lived in Silver Lake with her family and was educated in the Harrison and White Plains school district. Mary graduated from White Plains High School and was a lifelong White Plains resident. At nineteen she started working for Sears and Roebuck with a career that lasted 34 years.

There she meet the love of her life Lonnie Victor Sanders and went on to get married, and have two sons Lonnie Jr. and Charles Sanders. Mary was a devoted wife and mother, and a hard worker at any job she did. When not working she loved going to the casino, bowling, dancing, hanging out with her cousins, brothers and sisters.

Mary was preceded in death by her husband who she missed dearly, her brother Stanley Jones, and her sister Frances Sowells.

She will live in our hearts forever and will be dearly missed.