To share your memory on the wall of Richard Cramer, sign in using one of the following options:

Provide comfort for the family of Richard Cramer with a meaningful gesture of sympathy.

Print
Richard Cramer, color-field painter and influential teacher, died on April 10, 2020 in White Plains, N.Y. The cause of death was the coronavirus. He was 87.

In the late 1960s, Mr. Cramer developed a complex, color-mixing system to create... Read More
Richard Cramer, color-field painter and influential teacher, died on April 10, 2020 in White Plains, N.Y. The cause of death was the coronavirus. He was 87.

In the late 1960s, Mr. Cramer developed a complex, color-mixing system to create large, abstract-geometric paintings consisting of thousands of individual colors applied in small, rectangular units. His aim was to express sensations of colored light found in places he had experienced deeply such as the backwaters of Wisconsin's Lake Winnebago, the Arizona desert, and the architectural landscape of Philadelphia.

Working in his big, sunlit studio in Center City, Philadelphia, he built de Stijl-like white tables on castors and topped them with glass palettes which stood ready in an assembly line array. His color mixing technique consisted of precise portions of acrylic paint exacted using kitchen measuring spoons and plastic syringes. Although the technique was systematic, the paintings evoked delicate increments of movement and shifting luminescence. Mr. Cramer said of his work that it was “based on instinctual response and the belief that light and color are the most primal.”

In an essay for an exhibit at the Pennsylvania Academy of the Fine Arts in 1978, the artist, Therese Schwartz, wrote: “After he has made his treasure-house of color swatches, surrounding himself with his own color kingdom, he lets another side of the process take over. Having equipped himself with a super-abundance of color, he can let the mood of the moment prevail. It might be called a spontaneity spiked with expertise.”

Mr. Cramer's paintings were shown in a 1981 exhibition at The Institute of Contemporary Art, Boston, “Geometric Abstraction: A New Generation,” and at the Gloria Cortella Gallery in New York City. His work is in the collection of the Philadelphia Museum of Art.

Mr. Cramer was a beloved professor of painting and drawing at Tyler School of Art and Architecture, Temple University in Philadelphia from 1966 to 2003. He created two iconic courses, Color in Painting and Urban Industrial Landscape Painting. Students learned his color-mixing techniques and for a senior project created 12-foot paintings which they had to lug up 3 flights for lively group critiques in his loft.

In one among hundreds of tributes published on Facebook, Ann Latinovich, a former student, said: “He influenced everything from the colors I choose (to this day) to the way I think of the craft of art making itself. When it comes to painting, Richard was PASSION. He was opinionated, obstinate, direct and bold in ways that people either really loved, or, well, didn't. He was the first person I'd met that felt about painting the way I did. He lived for it. We connected over this kindred obsession and he taught me how to lean into it, to trust and how to surrender to the process. He taught me how to listen to color and still, I hear him say “When color calls, obey.”

In Mr. Cramer's landscape course, students took field trips to places ripe with possibilities for creating art. A highlight was an overnight trip to the coal-mining region of Schuylkill County, Pa. where they drew the abandoned St. Nicholas Coal Breaker and quirky coal-patch towns. They slept on bedrolls on the floor of the Yuengling mansion in Pottsville, talking late into the night fueled by plenty of Lord Chesterfield Ale. It was an exciting adventure so popular that students took the course multiple times.

Richard Charles Cramer was born on August 14, 1932 in Appleton, Wi. After a less than stellar high-school career spent playing ping pong, his art teacher recommended he go to Layton School of Art in Milwaukee. There he discovered his love for art and went on to earn advanced degrees at the University of Wisconsin, Milwaukee and Madison. In 1953, while a student at Layton, he married Patricia (Kelly) Cramer.

Beginning in 1955, Mr. Cramer served for two years in the U.S. Army, stationed at Fort Huachuca in Sierra Vista, Arizona near the U.S.-Mexico border. He taught art and painted in a studio overlooking the desert. The arid landscape made a lasting impression as did Bisbee, a nearby town with an open-pit copper mine.

Mr. Cramer taught at Elmira College from 1962 to 1966, where he met Carol Markel, an art student. When his marriage to Ms. Cramer ended, he and Ms. Markel moved to Philadelphia where he began to teach at Tyler. They painted on separate floors in their Center-City studio. The couple married in 1970 and in 1985 moved to New York's Lower East Side.

Mr. Cramer is survived by his wife, Carol; his daughter, Dianna; and his sons, Joseph and Richard. Another daughter, Catherine, died in 2013.

Memorial donations may be made to: Richard Cramer Color Award, payable to Temple University Tyler School of Art and Architecture and mailed to: Temple University, PO Box 827651, Philadelphia, PA 19182-7651. Or online at https://tyler.temple.edu/ways-to-give.

A memorial service will be announced later.
Read Less

Receive notifications about information and event scheduling for Richard

We encourage you to share your most beloved memories of Richard here, so that the family and other loved ones can always see it. You can upload cherished photographs, or share your favorite stories, and can even comment on those shared by others.

Posted May 09, 2020 at 01:29pm
Dear Carol,
We would like to express our heartfelt condolences for your loss. Richard was such a kind man and an integral part of the Seward Park Community. Everybody knew him and really appreciated his incredible style and zest for life. He will be missed.
Sincerely,
Nancy Welch and Michael Bahamonde (Apt. K1101)
Comment Share
Share via:
DK

Dale and Sandra and Eli Kessler

Posted Apr 20, 2020 at 10:29pm
May your spirit live on. Eternally. Thank you for touching our lives. You have made a great difference to us. We shall never forget you. With love.

Posted Apr 18, 2020 at 09:02am
I have spent the past few days trying to be an attentive mother and entertain my children for the Easter Holiday and searching for old photos that just won’t appear right now. I wanted so badly to post them in honor of him, my most favorite, most memorable teacher from Tyler School of Art-Richard Cramer. I first met him my freshman year, as I was fortunate enough to have him as my drawing teacher. He let us paint- that wasn’t supposed to happen - the other freshman classes didn’t get to do that- I loved that we did. He taught us to go to Home Depot and by roofing paper - cause it was large / cheap / and thick - perfect for creating crappy freshman and sophomore paintings on. He was funny-joked about our work/ pulled random objects out into the class to make us laugh...never remembered our names, but said it was ok cause he forgot his brothers name one time for 1O minutes. He bragged about his son in law ( I believe) being part of the Ice Age movies and how he got to go to fancy movie openings. He was genuine. He loved color. I loved color and he was the person who lead me to become a painting major. His classes brought out the best in you. I somehow managed to have him every year I was at Tyler - which was five. I was a double major with painting and art education and I studied in Rome, so things took a little more time... and every time I walked into his class - he’d say “Oh you again?!” but with a huge smirk/smile on his face. I always felt safe and myself in his classes. He pushed us to be better and experiment everyday. He was kind or funny in critiques- never cruel. Cramer was loved and respected by so many. He adored his wife Carol and children so much and spoke of them often in class. This photo here captures him so well- sitting and critiquing us in class. Thank you Richard Cramer for everything you taught me and for all the wonderful memories. Lightning bolts stitched on collars forever! Love you- Miss you- Thank you. 🖤⚡️🎨
Comment Share
Share via:
A

Posted Apr 15, 2020 at 12:13am
I have no memories of Mr. Cramer, but thank him for one of his finest creations, my brother in law, Joe. I couldn't ask for a better person to have become my brother in deed and he's been a phenomenal father and husband.
Comment Share
Share via: 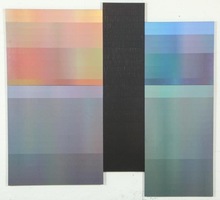 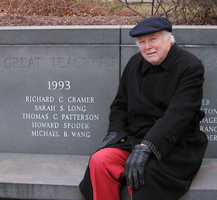 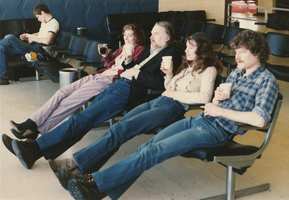