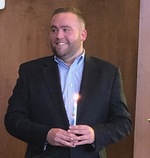 Rory James Doherty, 31 of White Plains, NY, passed away on Saturday, August 22, 2020 at Montefiore Hospital from complications that resulted from infections. He was loved and will be missed by everyone who knew him.

Rory was born on November 22, 1988 in White Plains, New York. and was a lifelong area resident. After graduation from Archbishop Stepinac HS in 2006, he attended Johnson & Wales University, RI and was a proud member of the Alpha Chi Rho fraternity. His time at Johnson & Wales led to a career in hospitality management. Most recently, Rory worked as the General Manager/ Chief Operating Officer of Glen Ridge Country Club in Glen Ridge, New Jersey. The Club described Rory as a rising star in the country club industry with a larger than life, dynamic personality.

Rory was a devoted and loving father to his two daughters, Kayla and Taylor. His world revolved around his beautiful and fun-loving girls, who adored him. Rory committed himself to giving his girls the world and filling their lives with happy moments.

Rory was an avid golfer, fisherman and sports fan of the New York Giants, Yankees, Rangers and Knicks.

A funeral mass will be held at 11 a.m. on Wednesday, September 2, 2020, at St. Bernard’s Catholic Church, White Plains, New York. There will be a celebration of Rory’s life at a yet to be determined location following the funeral. Rory’s personality shined brightly, and he would want guests to dress as such.

In lieu of flowers, we ask that contributions be made to a college fund for his daughters at: https://www.gofundme.com/f/in-loving-memory-of-rory-doherty?utm_source=customer&utm_medium=copy_link&utm_campaign=p_cf+share-flow-1