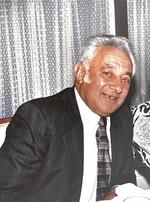 Sabino Pennetta was born on November 10, 1937 in Andretta, Italy to Ciriaco Pennetta and Luigia Terlizzi. He had two younger siblings, Francesco and Francesca who both passed away at young ages. He moved to Montreal with his parents before settling down in West New York, NJ and later North Bergen, NJ.

On November 16, 1963 he married Rosina Strazza at Our Lady of Libra Church in West New York, NJ. He worked as a laborer for 34 years for Fairview Cemetery in Fairview, NJ before retiring in 1999. He moved to West Harrison on August 27, 2007.

In lieu of flowers, please make a donation to your charity of choice.